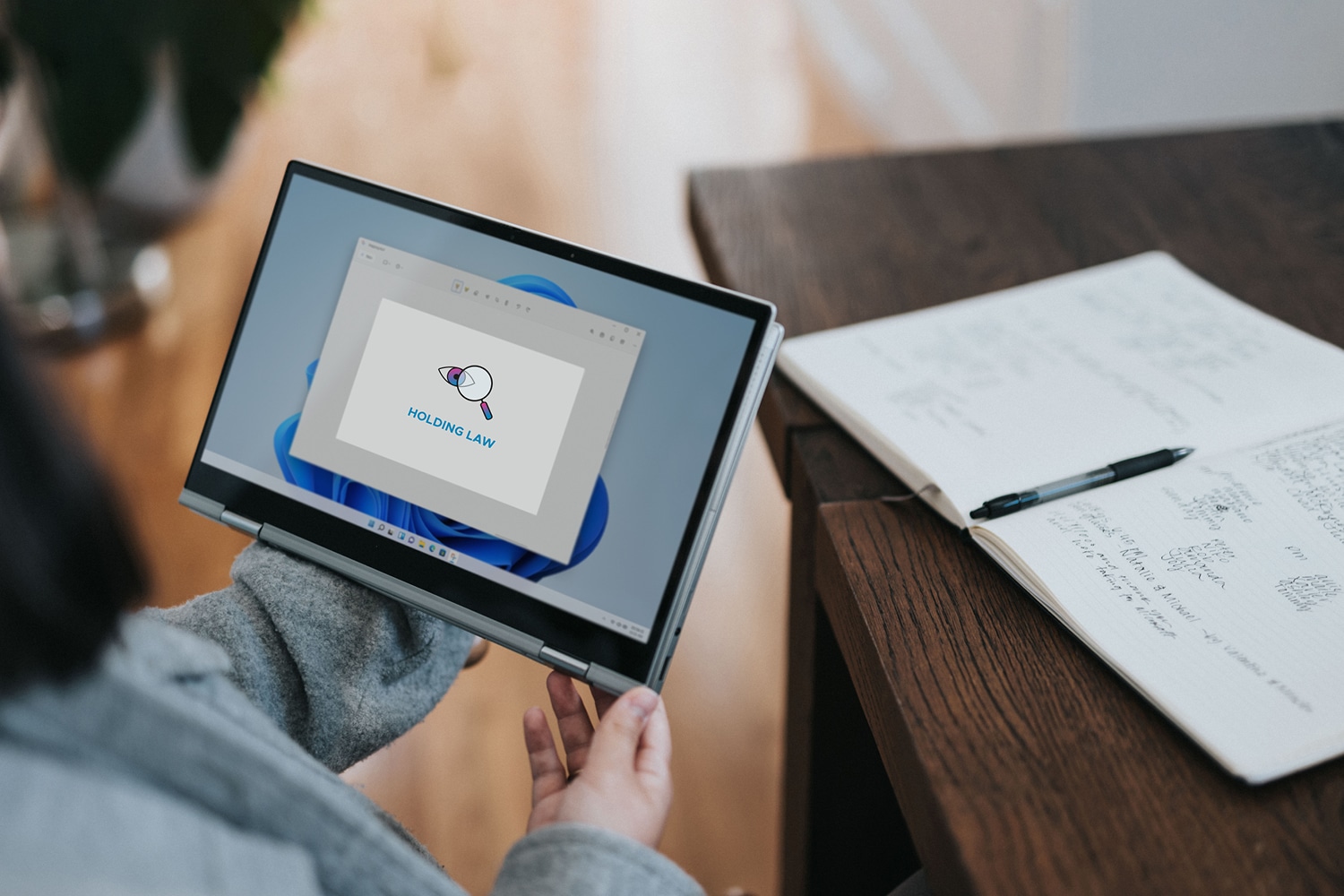 Since 12 October 2022, a holding law will be in force in Poland - i.e. the new provisions of the Code of Commercial Companies regulating the operation of parent companies and their subsidiaries.

The changes constitute a significant simplification and regulation of operations for all foreign companies opening their subsidiaries in Poland. Therefore, this law will be particularly important for investors opening business in Poland.

Until now, there were no regulations governing relations between related companies. This caused significant problems, especially when managing a group of companies - the interests of the parent company or even the entire group are not always aligned with the interests of the individual companies within such a holding.

This resulted in numerous complications, especially when Polish subsidiaries pursued the interests of foreign investors or capital groups.

There were also no clear regulations for managers of such groups, which would allow them to issue binding instructions and to manage the overall activity of subsidiaries. It hindered implementation of a coherent policy of foreign companies and their subsidiaries in Poland.

The new holding law provides solutions to these and other problems. However, these regulations will not be mandatory. All the most important information about the holding law can be found below. 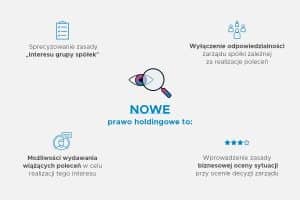 Who is the new holding law for?

The new holding law covers the following categories of companies:

Thus, it can be seen that the holding law will apply to businesses that, through development, have formed subsidiaries or special purpose companies to operate certain lines of business. In particular, these will be foreign companies that open subsidiaries in Poland.

This law may also apply to start-ups controlled by a corporate investor or investment fund, provided that at least one of the above mentioned conditions is met.

The new regulations will not be obligatory. In order for them to apply, related companies must form a so-called group of companies.

So is it worth forming a group of companies and implementing new regulations?

According to the definition, a group of companies is a parent company and its subsidiaries, guided by a common interest and common economic strategy. The new regulations introduce solutions fostering implementation of such a common strategy.

Thus, the new law will be a good solution for companies, where conflicts of interests arise between companies, or even ambiguity as to realization of a common objective of the whole group.

Holding law introduces tools allowing for better management of such situations, introducing clear rules for management boards and shareholders of both subsidiaries and parent companies.

The most important solution of the holding law is the introduction of the notion of the so-called interest of a group of companies.

It is a solution to the most urgent problem so far appearing among the persons managing the parent company or the affiliated companies. These persons must take care of both the interest of the entire holding and the interest of the particular company whose board they compose. What if those interests do not coincide and the decision taken may be unfavourable for the company but favourable for the entire group?

It seems to be a rather general provision, but it finally gives some guidance as to how company managers should act. So far the law did not mention it at all, and now we have a clear indication of "the interest of a group of companies".

Managers will be able to justify many of their decisions or actions with the interest of the group, which is also reflected in the provisions on their exemption from liability - which is discussed further in the article.

More importantly, the new regulations introduce specific tools to implement and manage group interest, such as the institution of a binding instruction. Although the "group interest" is not clearly defined, the regulations do propose a clear procedure for how it should be determined in practice and implemented by managers.

Binding instructions as a right of the parent company

An extension of the group interest principle and a tool for its enforcement is precisely the introduction of the right to issue a binding instruction by a parent company to its subsidiary.

The instruction must be issued in written or electronic form and must indicate how the subsidiary is to behave, but also:

However, such binding instructions will not always have to be implemented by the subsidiary. The legislator has indicated certain circumstances, which - when occurring or potentially occurring - will involve a refusal to comply with them, i.e:

As you can see, the essential rules for issuing and executing instructions to a subsidiary are specified. These procedures will be helpful in achieving the group's interests - thanks to clear guidelines there will be no room for discretion and actions with unknown results.

Exclusion of liability of the subsidiary’s management board

Following the right to issue a binding instruction to a subsidiary, the holding company law provides for the exemption of management board members of such companies from liability for carrying out that instruction.

From the point of view of the members of subsidiaries’ management boards, this is probably the most important change in the new legislation.

The legislator rightly drew attention to the "potential danger" that a binding instruction may cause, and therefore decided to exclude the liability of members of management boards, supervisory bodies and liquidators of the subsidiary towards the subsidiary for damage caused by the implementation of a binding instruction. Interestingly, this solution is to be applied, respectively, to persons holding such positions in the parent company, acting in the interest of a group of companies.

The management board of a subsidiary can then, having fulfilled the above described formalities, calmly carry out an instruction addressed to it from the parent company, not worrying about its own liability towards the company.

I believe that the best way to serve the group's interest is to issue binding instructions, so that there is no need for additional interpretations of the intentions while acting in a given situation.This should make decision-making in multinational companies much easier. The parent company will be able to give clear instructions to the subsidiaries, and the managers of these companies will, in turn, be able to implement them, not worrying about the consequences of their actions.

Liability of a parent company for the subsidiary’s actions

Another very important change is the introduction of liability of the parent company for the debts of the subsidiary - debts incurred as a result of a binding instruction implementation.

It is easy to imagine situations in which, as a result of a binding instruction, a subsidiary becomes indebted while the parent company clearly makes money. In such a case (and e.g. when the subsidiary declares itself bankrupt), creditors could be left with nothing.

However, the new holding company law protects them from such a situation. First of all, the parent company will be liable for damage caused to the creditors of the subsidiary arising as a result of a binding instruction implementation by the subsidiary.

It is therefore an appropriate solution, linking the entire process of issuing and executing binding instructions by the parent company.

The holding law implements yet another important principle - the so-called Business Judgment Rule.

Its aim is to exclude the liability for damage inflicted on the company as a result of decisions made by the authorities that turned out to be erroneous, as long as they were made within the limits of justified business and economic risk.

The above principle indicates that only the correctness of the decision-making procedure is to be assessed with regards to the moment the decision was made and the circumstances surrounding it. In other words - the members of the body who carefully performed their duties and decided to take a business-justified risk by the company will be protected in case the decision, once made, turns out to be wrong and causes damage to the company.

The application of the holding law depends on the adoption by the subsidiaries of resolutions on participation in the group of companies and subsequent disclosure of that fact in the National Court Register for all companies belonging to the group.

In case of an international group of companies, it is sufficient that the Polish subsidiaries disclose in the KRS the fact of their participation in the group of companies. A foreign parent company does not have to disclose anything in the country of its registration.

Consequently, first of all, shareholders' meetings or general meetings of joint stock companies must pass resolutions on participation in the group of companies. In this resolution the parent company must be indicated.

The holding law also introduces other important changes. For example, new rights and obligations are acquired by the management boards and supervisory boards of the companies (read about it here), moreover, the procedure of forced buyout of shares or stocks of minority shareholders is introduced - I wrote more about it here.

Entry into force of the holding law seems to be a good idea which will solve many problems troubling managers of subsidiary companies. If you want to find out more or consult the legitimacy of implementing the holding law in your company, contact us - we will be happy to help! 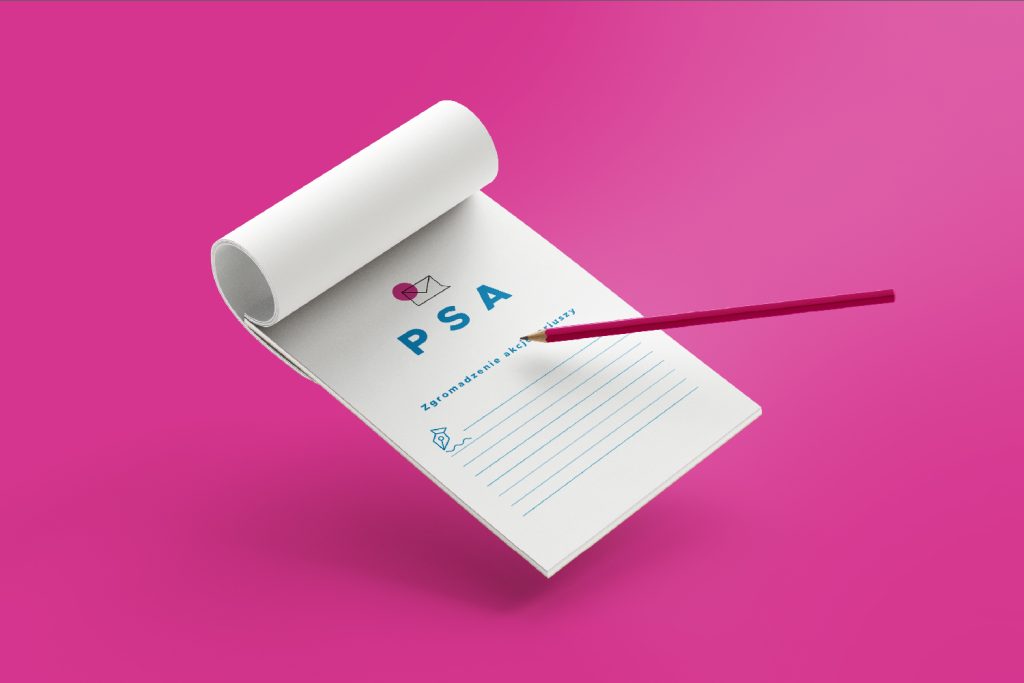 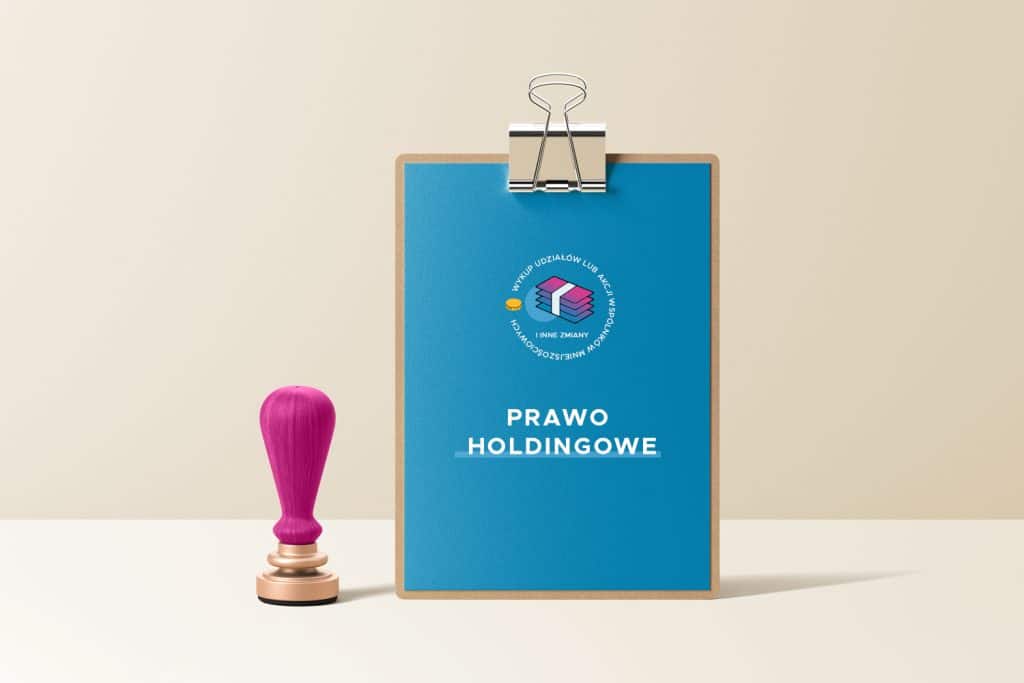 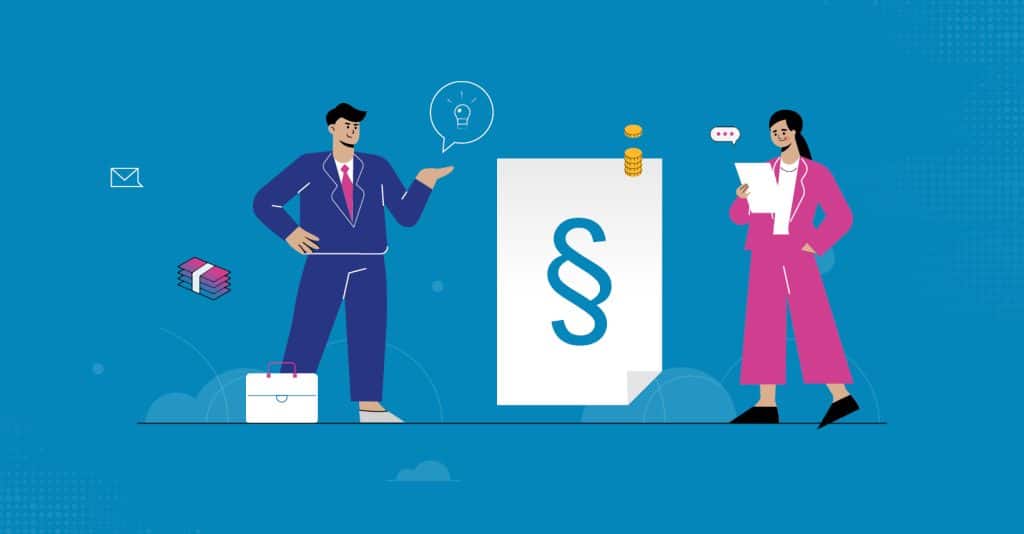